What is Embodied Attunement? Why is it Important in Working With Attachment?

Embodied attunement is the ability to experience in our bodies emotions in the bodies of others. The article explores how we can develop this important capacity.

The ability of the primary caregiver to regulate a child’s emotional states has been found to be of central importance in the formation of secure attachment in children (Wallen, 2007). The ability to regulate affect states of a child in turn depends on the caregiver’s ability to attune to the conscious and unconscious emotional experiences in the child. Attunement can simply be understood as getting to know the inner emotional states of a child. Attunement can take different forms. Based on a study of typical emotional experiences of people suffering from a loss, even a theoretical understanding of what a person might be going through after a loss can be seen as some kind of attunement.

What kind of attunement is known to maximize a caregiver’s ability to offer affect regulation to a child? For Stern (1985), it is affect attunement with the most important aspect of it being the sharing of emotional states of the child. Because emotions are primarily body experiences (Siegel, 1999; Damasio, 2003), the ability of the caregiver to experience in his or her body the affective experience of the child is critical for affect regulation. This ability of the caregiver or a therapist we will call embodied attunement.

There are many ways in which such embodied attunement can take place. The caregiver’s attention to the child’s verbal and non-verbal communications in the form of facial and other body expressions as well as the tonality or prosody in the child’s vocalizations and other communications; mirroring of expressions of body, face, and voice of child; mirror neurons in the brain through which one can simulate the inner states of the child in oneself from observing the various expressions of the child; innate knowledge of what children go through from one’s own experience as child or knowledge learned otherwise about experiences of children, and so on. All of these dynamics have as their underlying assumption that communications between mother and child do not involve any exchange of information about each other’s states through direct exchanges of energy other than through the dynamics described above.

Scientific evidence from numerous studies from multiple disciplines compiled by James Oschman (2015) is part of a growing evidence for our ability to exchange information about our inner states with each other directly (body to body and brain to brain) through measurable frequencies of the electromagnetic spectrum. Bruce Lipton (2016) offers evidence of the ability of the antennae like filaments on the surface of the genes inside the cells of living organisms to receive electromagnetic information from the outside and alter gene expression from such information. Hammerschlag et al (2015) reviewed the evidence of bio fields (electromagnetic, biophotonic, and other spatially distributed fields) generated by organisms through which information exchange and interactive regulation among organisms are possible.

Larry Dossey (2014) offers explanations based on findings in quantum physics for such attunement between caregiver and child even at great distances. We can define our ability to attune to each other (through processes just discussed that fall outside of the conventional means of attunement listed earlier) as our ability to inter-personally resonate with each other.

Our ability to inter-personally resonate with each other could not only be a significant source of attunement (i.e. getting to know the inner states of each other) but also a significant means of influencing or regulating the inner states in each other. Kleinian psychoanalytic theory (2003) conceptualizes the interactive regulation of the child by the mother as follows: The anxious child ‘projects’ its anxiety (that it does not yet have the physiological capacity to handle) into its mother. The mother receives the child’s anxiety through ‘projective identification’, transforms it through her more capable physiology, and sends information back to the child to help the child cope with its anxiety.

Such a process is likened to a mother bird feeding the baby bird food the child cannot yet digest by first chewing it in its own mouth. The evidence for inter-personal resonance cited earlier provides the Kleinian theory of interactive regulation through projection and projective identification a scientific basis and understanding. Inter-personal resonance can thus be a source of interactive affect regulation. It is perhaps more important that has been recognized.

Inter-personal resonance, because it could potentially involve the entirety of the brain and body physiology, can be a significant means for embodied attunement, the ability to sense another’s inner state in one’s own body that is central to the caregiver’s ability to regulate the child affectively. The connective tissue matrix that spans the body from head to toe is part of ‘the living matrix’ of tissue and fluid in the human body. It has been found to have the ability to exchange information with the outside at faster rates than those found in the nervous system (Oschman, 2015).

We know from body psychotherapy approaches (Marcher & Fich, 2010; Marlock, Weiss, Soth, & Young, 2015) that when we have low levels of capacity for tolerating difficulty emotional experiences, we tend to form physiological defenses against them. Such defenses, in addition to stressing and dysregulating the body and forming psychophysiological (psychosomatic) symptoms, make the body less available and capable of embodied attunement by limiting the area of the body that could be involved in the experience of the emotion, inter-personal resonance, and interactive regulation in relationships with others. Physiological defenses against emotions also reduce the body’s capacity to tolerate difficult emotional experiences because they increase stress and dysregulation throughout the body; this is quite important because one of the determinants of affect tolerance is the level of stress and dysregulation in the body (Selvam, 2018a).

Because emotional experiences can potentially involve the entirety of the brain and body physiology (Barrett, 2017), greater embodiment of emotions (using more of the body in a regulated way to expand and regulate the emotional experience in as much of the body as possible) offers a method for increasing the capacity in caregivers (and in therapists working with attachment problems in their clients) to tolerate and regulate difficult emotional experiences in themselves (Selvam, 2018b). This would in turn increase their capacity for embodied attunement and interactive affect regulation when they are with their children or their clients. In addition, these capacities offer the possibilities for improving cognitive and behavioral outcomes in attachment work (Selvam, 2018c).

Integral Somatic Psychology™ (ISP™) offers therapists in all therapeutic modalities methods for developing and using their inter-personal resonance towards increasing their capacity for embodied attunement and interactive regulation of others. ISP also offers additional methods for increasing the capacity for regulating affect states in oneself and others through embodiment of a wider range of emotions including sensorimotor emotions that dominate early attachment experiences. ISP professional training and workshops are taught in over a dozen countries in North America, Europe, Asia, and Australia.

Barrett, L. F. (2017). How emotions are made: The secret life of the brain. Houghton Mifflin Harcourt: Boston, MA.

Dossey, L. (2014). One mind: How our individual mind is part of a greater consciousness and why it matters. Hay House Inc.: Carlsbad, CA.

Lipton, B. H. (2016). The biology of belief: Unleashing the power of consciousness, matter, and miracles. Hay House Inc.: Carlsbad, CA.

Selvam, R. (2018a, January 8). How to improve outcomes in all therapies through embodiment of emotions (Blog post). Retrieved from https://integralsomaticpsychology.com/improve-outcomes-therapies-embodiment-emotions-2/

Siegel, D. J. (1999). The developing mind: How relationships and the brain interact to shape who we are. New York: The Guilford Press.

Stern, D. N. (1985). The interpersonal world of the infant: A view from psychoanalysis and developmental psychology. New York: Basic Books. 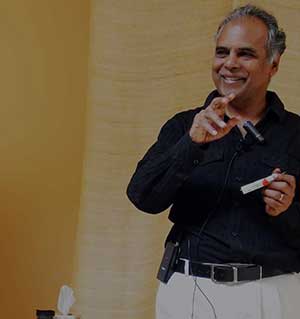 Did you know that greater embodiment of emotions can significantly improve all outcomes in therapy? Watch My Free Webinar

Dr. Selvam is a licensed clinical psychologist, the author of The Practice of Embodying Emotions: A Guide for Improving Cognitive, Emotional, and Behavioral Outcomes, and the developer of Integral Somatic Psychology (ISP), an effective somatic therapy that helps clients achieve optimal mental health by fully embodying their emotions. He has taught for twenty-five years in over twenty countries.

This website uses cookies to improve your experience while you navigate through the website. Out of these, the cookies that are categorized as necessary are stored on your browser as they are essential for the working of basic functionalities of the website. We also use third-party cookies that help us analyze and understand how you use this website. These cookies will be stored in your browser only with your consent. You also have the option to opt-out of these cookies. But opting out of some of these cookies may affect your browsing experience.
Necessary Always Enabled
Necessary cookies are absolutely essential for the website to function properly. This category only includes cookies that ensures basic functionalities and security features of the website. These cookies do not store any personal information.
Non-necessary
Any cookies that may not be particularly necessary for the website to function and is used specifically to collect user personal data via analytics, ads, other embedded contents are termed as non-necessary cookies. It is mandatory to procure user consent prior to running these cookies on your website.
SAVE & ACCEPT